The la Verna mountain went down in the greatest worldwide holy places’ history thanks to an and encounter full of humanity, kindness and spiritual communion. In spring 1213 Francesco d’Assisi and Friar Leone were passing through Montefeltro county when they suddenly heard of party in the nearby St Leo Castel: could it possibly be some knight’s investiture? That was a chance to meet people, talk to them about the Gospel, about Love. Francesco walked up to castle and perhaps, in the meanwhile, a minstrels competition was running. 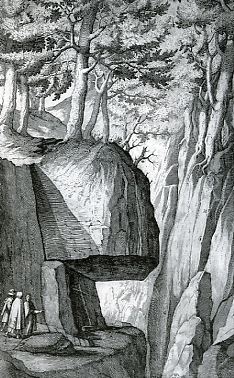 He climbed on a stone low wall and started reciting his love song’s main theme: “Tanto è quel bene che aspetto, che ogni pena m’è diletto” (I have cause to rejoice even for pain and sorrow if I think of how much of good I am waiting for). His words were so quivering so that all people’s eyes and minds looked like as if they were captivated by him.
Among them there was Orlando Catani too, Count of Chiusi in Casentino.
He was listening to him increasingly and in the meanwhile he could feel rising deep inside him the need to talk to that new man, to open his heart and soul in their very deepest thoughts. Once Francesco stopped talking, the count made a step forward and asked him. Francesco was glad for that but first he wanted the count to fulfil his duties as a guest, he told him to seat and have dinner with those who had invited him, then, he told him: “We could talk as long as you like it.”
The meeting was intense. Francesco’s word lighted up count’s mind and heart, according to him Francesco was a man of God, but the speaking also made the count able to grasp a little from Francesco’s soul.
Therefore he wanted to make an offering that fixed Francesco’s will and desire of seeking for God and solitude, then he said: -“I had an estate in Tuscany, a faithful mountain, called Vernia Mountain which is very lonely and covered by wilderness, and it is even too suitable for those who are willing to do penance in a forgotten place, or for those who wish for a solitary life. If you might like it, I could give it all away to you and your mates, for my soul release.”
A little later Francesco send two of his mates to have a look, and once they confirmed what they saw coincided with what the count said, he accepted the mountain with great joy. 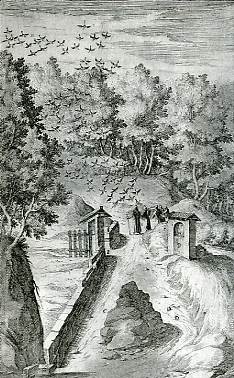 The Fioretti describe the scene when Francesco came to that place saying that a multitude of birds welcomed him at the foothills shaking their wings to show their bliss and joy. Francesco told his mates that it was a sign of God’s gratification: “Our Lord Jesus Christ likes that and want us to live in such solitary place”. Thus la Verna became one of the hermitages where he liked to spend extended period of retreat. We do not know how many times he went there, but we can state what happen thanks to St Michael, who passed through there in the end of summer 1224, that Francesco’s last time in la Verna was during Lent 1224. He was sick and tired, he gave up on guiding his order that gained the approval of the Rule the previous year with by the Pope Onorio IV (29th November 1223). 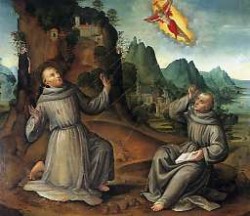 The Rule contained the very essential part the Gospel and pointed out the path to follow: according to Francesco in was the beginning of a new itinerary of closeness to God. Nine month earlier, the celebration of Christmas allowed him to empathise with the experience of Incarnation’s poverty (Greccio Nativity scene, 1223. Now the peak of the experience of Love would have come for him: to give his life. Here he had the courage to wish and ask for it during his prayer, solitude and bliss nights: to experience a few of the same love and pain experienced by Jesus during his Easter of Death and Resurrection. He was satisfied: close to the Feast of the Exaltation of the Cross (14th September) his body was marker the same wheals of the Crucifix. 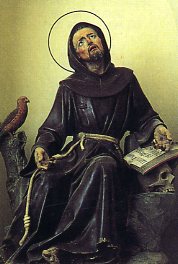 Moreover, some nail-shaped outgrowths showed on his hands and feet.
Something like this never happened in history. Twenty years earlier (1205/1206) Francesco started following the Gospel’s teachings listening to the Word of the Lord from the St Damian’s Crucifix: those words and that imagine remained impressed in his heart. Now they were taking shape in his flesh. That was his Easter: the Stigmata Feast liturgy applies St Paul’s words to him: “I was crucified with Jesus Christ and it is not me who lives right now, but it is Jesus who lives in me… indeed I bear Jesus’ stigmata on my flesh (Gal 2,20; 6,17). 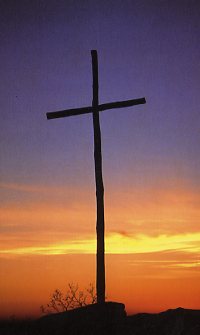 Francesco turned into that word of love he had been living, announcing and musing on for years. Toward the end of September he left from la Verna. He had been trying to hide that wonder’s sings, only few among his closest friends became aware of it little time before he passed away (3rd/4th October 1226). La Verna, occupied, beloved and cherished by Friar Francesco’s mates, arises and has its origins in this historic and mysterious event. “Cause of Francesco’s unique experience of Christ, several and pensive souls include that place among the greatest places of Spirit still today.” (Paolo VI). La Verna carries countless messages of beauty, silence, strength, seeking and peace… but they are no more than a small grain of an echo when the la Verna Mountain seemed to be aflame, a gleaming flame sparkling all over in the nearby valleys, as if it was the sun over the earth.
Visiting la Verna feels like overlooking on this mystery, asking for getting exposed to that light.

Designed and developed by Andrea Ferrato